Some boat hulls feature a partial length spraychine in their forebody topside surface. This form characteristic is closely related to the partial length chine. There is not just a break but a real step in the run of transverse cross sections. Beyond begin and end of the vanishing spraychine the hull surface is smooth and free of breaks.

This article is not about making a hull with specific dimensions, but shows which method is practical to achieve the wanted shape characteristic.

In the following the terms used for point, curve and surface types are those of MultiSurf. This may serve the understanding and traceability.

A vanishing spraychine can be achieved in two ways:

1 - the hull is made of two basic surfaces, which meet smoothly at a common longitudinal edge exept in the region of the spraychine.

2 - a smooth basic hull is split along the run of the spraychine in two longitudinal strips and the upper strip is pushed outwards to create a local gap.

In model cloft-cloft-spraychine.ms2 the hull is composed of two separate surfaces – one surface for the topside and another one for the bottom. Both surfaces are C-spline Lofted Surfaces, modeled according to the vertex curve method (see the tutorial article „On the Modeling of Round Bilge Hulls“). The number of B-spline master curves (mc), their position in longitidinal direction as well as the number of control points is respectively equal. C-spline Curves are passed as guiding curves for fairing through corresponding control points (vertex curves). 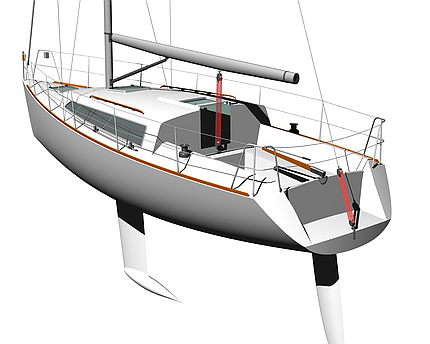 Model cloft-cloft-spraychine.ms2 – arrangement of master curves and guiding curves for fairing of the C-spline Lofted Surfaces topside and bottom.

Vertex curve vl_3 describes the lower longitudinal edge of the topside, vertex curve vl_4 the upper edge of the bottom. Although vl_3 and vl_4 share common control points from mc4 on, there is no guarantee, that both curves now run on top of each other. How this can be enforced is demonstrated in model ccurve.ms2.

Model ccurve.ms2 holds the C-spline Curves c1 and c2, each supported by 5 common cps and the different Point p2_a, respectively p2_b. Both curves pass through the common cps, but do not run in accordance aft of control point p3. The deviation gradually decreases, but does not disappear completely. 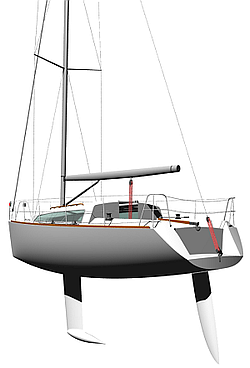 When a Bead e1 is put on curve c1 at a close distance behind point p3 and when e1 is added as another cp to curve c2, then c2 will run in agreement with c1. This procedure is analogous to manual drawing with a drafting batten, which can be forced into a wanted direction by putting two weights very close side by side. 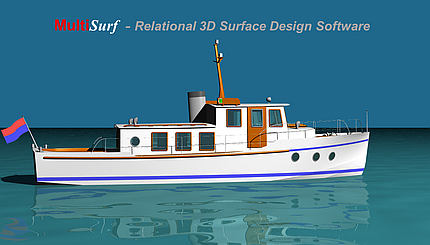 Curve c2 is now supported by 7 cps, and the bead e1 on curve c1 is a passive support for c2, because it is not a free point but constrained to be only movable on curve c1.

Now let us go back to model cloft-cloft-spraychine.ms2.

Here too there is just aft of the first common cp (end of spraychine) a bead e1 put on the vertex curve vl_3, which now serves as additional cp for vl_4 in order to enforce the further run in accordance. When we insert close behind mc4 another master curve (mc4a_bot) and use e1 as its first support point, it is made safe that the edges of the topside and bottom are on top of each other. 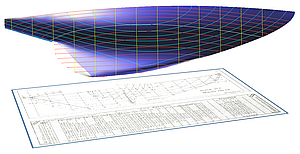 Model cloft-cloft-spraychine.ms2 – additional closely spaced master curve mc4a_bot forces the smooth joint of topside and bottom and thus the vanishing of the spraychine

The remaining cps of mc4a_bot are gained by intersecting (XYZBeads) the vertex curves vl_5, vl_6 and vl_7 at the location of e1.

By this construction, which uses only passive cps for the closely spaced additional master curve, the longitudinal joint of both surfaces is hard-wired.

But how then is it guaranteed that from mc4 on (end of spraychine) there is no break arising in transeverse direction between topside and bottom?

To avoid such a discontinuity the mcs of the bottom must start with the same tangent direction as the mcs of the topside end. This the case if the second but last cp of the topside mc, the common cp and the second cp of the bottom mc are aligned. A B-spline Curve starts tangent to the first segment and ends tangent to the last segment of the polyline connecting its control points.

To build in this relationship in model cloft-cloft-spraychine.ms2 a Line is spanned between the second but last and the last cp of the topside mcs. Then a Bead on this line serves as second cp for the bottom mc.

This way the smooth transition from topside to bottom is hard-wired.

The proper surface of the spraychine is spanned as Ruled Surface between SubSnakes on the corresponding EdgeSnake of topside and bottom.

The basic hull surface is split along a longitudinal snake in two parts, topside surface and bottom surface. The topside is then pushed outwards to form a gap.

An example of this method is model cloft-spraychine.ms2. The hull surface is a C-spline Lofted Surface using 6 B-spline mcs, each supported by 6 cps. C-spline Curves are passed through corresponding cps as guides for fairing (vertex curves). 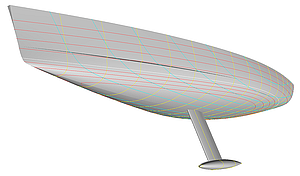 In short distance to mc3 the Bead e1 is created on vertex curve vl_1. At the location of e1 the remaining vertex curves are intersected by XYZBeads. These passive control points now serve as supports for an additional mc. The purpose of this one is to clamp the hull surface at the end of the spraychine.

Now a Bead is created on each mc and a C-spline Curve passed through to define the run of the spraychine.

Next each mc is split in two SubCurves at the bead positions. The lower SubCurves serves as mcs for the bottom surface (C-spline Lofted Surface).

Model cloft-spraychine.ms2 – splitting the master curves of the basic hull into SubCurves for bottom and topside mcs

The second mc of the topside is replaced by a Relative Curve in order to create a gap at the lower end. This one and the remaining upper SubCurves are then used as supports for the topside surface (C-spline Lofted Surface).

Model cloft-spraychine.ms2 – master curves of topside and bottom. The Relative Curve mc2a_new defines the width of the partial length spraychine.

Alike to the previous example the spraychine surface is spanned as a Ruled Surface between SubSnakes on the corresponding EdgeSnake of topside and bottom. 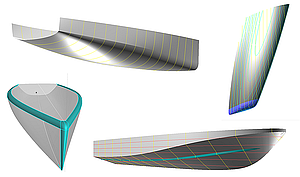 Disalike to the previous model there is no procedure required to make mcs of topside and bottom joining smoothly, the basic mcs are simply divided. In both models an additional closely spaced mc at the end of the spraychine tightly clamps the surfaces; this ensures that the common edges of topside and bottom run on top of each other. 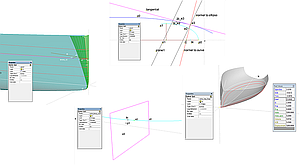 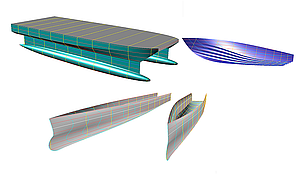 Further, there is the SubSnake n2 being the forward portion of the upper edge of the hull (EdgeSnake).

Based on snakes n1 and n2 and the Relative Curve spraychine_out a Blister is created. Snake n1 identifies the parent surface and together with snake n2 specifies the surface region to become “soft”, so to speak. This part is then “bend” outwards until snake n2 touches the curve spraychine_out.

Apart from the start and end point offsets the Relative Curve spraychine_out is supported by a Graph entity. In this way the distribution of the offset from the parent curve can by controled conveniently.

Model blister-spraychine.ms2 – the shape of the Relative Curve spraychine_out is controled by a Graph entity. The tangent run out at the end of snake n1 is thus easily hard-wired.

The shape of a Graph is displayed via View/ Profile/ Graph. Its values can be edited by mouse or arrow keys in the Profile windows.

In the example under discussion the last and second but last values are zero; this causes the Relative Curve to end tangent at the end of its parent, the SubSnake n1.